< go back
An old-school drummer who has learned the tricks of the trade on his own but has built an international career both in jazz and other musical styles and genres. 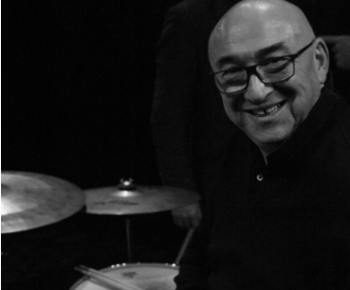 Who is… Bruno Castellucci?

No drum school or conservatory of music for Bruno Castellucci (°1944), at least not as a student. Very soon however, he treads the boards as he wins a jazz competition and gets a helping hand from big names who known the business inside out. From the outset, his motto has always been the same: listen carefully to others and make no difference between jazz and other musical styles.

Over the years, it has led him to play amongst others alongside André Brasseur, Alex Scorier, Art Farmer, Philip Catherine, Joe Zawinul, Chet Baker and Jaco Pastorius. In 1974, he becomes Toots’ regular drummer, a role which he also fulfils for three decades in German trombonist Peter Herbolzheimer’s big band.

Artists the likes of Maurane and Marc Moulin also request his services. For a couple of months, he takes part in the musical ‘Hair’ and was the drummer for the original version of ‘Eviva Espana’.

Castellucci’s name circulates not only on the entire European jazz scene as a reliable and professional drummer for live concerts but he is also a very sought-after studio musician.

He is still active as a teacher and he is not yet prepared to miss the stage for anything in the world. As a matter of fact, he will be celebrating the 50th anniversary of his career along with a few fellow musicians.

It may not be extremely original but you have to admit, there is nothing more Brussels than this: the terraces at Sablon and at Grand-Place. My wife likes to have a Trappist beer every now and then; as for me, I like kriek, and these are the only places we deliberately go to whenever we feel the urge. Subsequently, Grand-Place and its surrounding streets also remind me of the jazzy past with among others Pol’s (Jazz Club). In Rue du Marché au Charbon, there also was the Carton Club. The owner thought it would be an original idea to offer a free drink to everyone involved in a car accident and who could submit a written record. “Un carton” is actually the slang word for collision. It did not take him more than a couple of weeks to realise that it was not such a good idea after all. So, he changed the name to La Cartonnerie. But, all kidding aside, I have seen Mingus and many others performing in this club.

I love entertainers such as Frank Sinatra, Ray Charles and Tony Bennett. Bob Mover is a saxophonist who sings as well. I bought one of his recent records, ‘My Heart Tells Me’. At the same time, I also purchased a new album by Betty Carter and Carmen McCrae, their ‘Live at the Great American Music Hall - San Francisco’. I listen to it at least once a week. It includes all essential components: tradition, creativity, simplicity and, primarily, themes. When I have people over, I generally put on the album and then, my guests often ask me who is singing. That is the power of great classics which obviously include the duets by Louis Armstrong and Ella Fitzgerald as well.

That was recently, in Berlin when I saw Brazilian singer Joyce on stage with fellow countryman and guitarist Dori Caymmi. The repertoire mainly included bossa nova, samba as well as a few other styles from her home country. As expected, theme and harmony are ever present but most importantly, her improvisations are impressive. That is what I call genuine bebop. It is also clear she really enjoys performing on stage and sharing the vibe with the audience. It is an aspect that is far too often overlooked these days.

Be yourself, no more no less. Toots used to say it all the time and he was right. No ego, no show. If you have something to say, just say it. But if you say something you do not believe in, it is not real and sounds hollow and disingenuous.