< go back
Barely nineteen years old but already all the hype of Belgian jazz land with SCHNTZL, member of a series of groups with international line-up and a commissioned composition for music theatre. 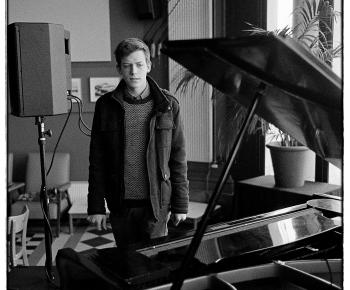 Hendrik Lasure (°1997) grows up in a musical environment since both his parents are passionate music lovers. His father was singing in a Baroque choir and his mother graduated as clarinettist.

The young Hendrik goes to the local music school in Knokke but finds the lessons classical music extremely tedious and frustrating. Prompted by boredom, he gives the jazz section a try. As soon as he hears Dizzy Gillespie’s version of ‘On the Sunny Side of the Street’, he immediately knows what he wants to do. He joins the same piano class as Bram De Looze right away.

Next stop is the Royal Conservatory of Music in Brussels where he is currently attending his last year. Up to now, he has learned the ropes with Diederik Wissels, John Ruocco and Kris Defoort.

His encounter with Casper Van De Velde plays an important role. They were only twelve and fourteen at the time when they cross paths during music workshops organised by ‘Jeugd en Muziek’ in Dworp. This is precisely where the seed of their future duo SCHNTZL is sown.

During the W.E.R.F.’s label night beginning of October 2016, the duo presents its debut album. And as is expected nowadays, besides the CD, there is also a vinyl version (double LP).

The clips on YouTube reveal a definitely more surrealistic side of the two youngsters.

Meanwhile, Lasure looks also beyond SCHNTZL. So, there is Orange Moon with Manolo Cabras and Mathieu Calleja. In addition, he also performs in Sam Comerford Thunderblender where alongside the Irish saxophonist, he plays with drummer Jens Bouttery. Furthermore, he treads the boards with Amber Haze where he forms a trio with Casper Van De Velde and Italian vocalist Francesca Palamidessi.

A CD with Spanish guitarist Toni Mora has just been released early this month.

His next challenge is composing music for a new musical theatre piece written by Wannes Gyselinck which tells the story of writers and artists during WWII which were fleeing Nazism and went seeking their salvation in the USA.

I have been living in Brussels for the past two years and as far as I am concerned, the Queen’s gallery is an impressive construction, particularly when the sun is shining through the glass roof. I walk through this gallery at least once a week. Yet time and again, I am fascinated by the small shops and artisan businesses like the one where they sell gloves.

On the advice of the producer of SCHNTZL’s debut album, Koen Gisen, I purchased the solo album by Mark Hollis. It dates from 1998 but still sounds as fresh as ever. The songs have not lost any of their expressiveness. It is adventurous pop music which I really enjoy, a subdued and minimalistic construction associated every now and then with wacky arrangements.
As a matter of fact, I buy far too many CDs and books. However, every time, it feels like a wise investment. And with the second-hand shops in Brussels such as Pêle-Mêle, it is rather easy to cut down on your expenses.

It was the dance performance ‘Rain’ by Anne Teresa De Keersmaeker-Rosas on music by Steve Reich performed live. The view of the four grand pianos on stage alone was out of this world. Not to mention her choreography on top of it all. During an interview after the show she said something that I will never forget: “Art which emerges from emotion, is often emotionless”. In her view, art should be based on structure and only then, there is the content. She applies this principle with a great deal of discipline in Reich’s piece where she converts chords in motion.

I would like to refer to a quote by one of my favourite pianists, Sviatoslav Richter where he explains his approach to executing existing pieces. Logic does not exist for him. He only knows how to reflect. He goes as far as to consider himself an ignorant man who does not understand what is happening in the world and mainly does not grasp the difference between reality and art. “I do not know logic, I only know how to reflect”. Personally, I am also someone who reflects. In all that I do, I first ask myself why.