< go back
Using tradition as a starting point, bassist Manolo Cabras keeps on pushing back the boundaries of free jazz, not only as a popular sideman but also with some of his own projects. 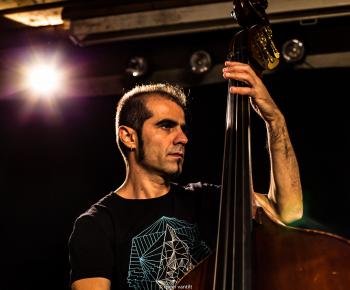 Who is… Manolo Cabras?

His native land is Sardinia (Cagliari) where he starts off studying the classical violin.

Until the day as a joke he gets out his brother’s double bass, an instrument he teaches himself to get the hang of. Practice follows in a small cover band.

The albums by Weather Report, Ornette Coleman and Miles Davis have played a more prominent role as he gets acquainted with the world of jazz fusion.

When he is eighteen, Manolo Cabras (°1971) travels to Milan, Rome, Sienna and Bologna for music. At the time, it is the pre-Berlusconi era and Italy is still enjoying a great gust of freedom and experimentation.

Via Paris, London, Spain and a stopover in The Netherlands (1996-2002, studies at the Conservatory of The Hague), he ends up in Brussels where ever since he is one of the most sought-after and highly appreciated bassists on the Belgian jazz and improvisation scene.

From the outset, Ben Sluijs relies on him. This collaboration is richly illustrated by various recordings under the W.E.R.F. label.

The same applies to Cabras’ other brother in arms, Erik Vermeulen. An impressive series of CDs is issued under the same Belgian quality label.

His most recent release is the one by trio Wheels. Following two EPs, ‘Soulitude’ marks the trio’s official debut. With guitarist Mathias Van de Wiele (leader of the band) and drummer Jakob Warmenbol, the bassist explores the boundaries between psychedelic rock, jazz and improvisation.

However, he is not only an expert sideman, he also has his own projects and bands.

For example, there is Manolo Cabras & Basic Borg with amongst others legendary Italian saxophonist Riccardo Luppi and vocalist Lynn Cassiers. Here the focus is entirely on a stratification of groove and harmonic material but with a degree of independence at all levels.

On Saturday at Jazzstation, he presents ‘Melys In Diotta’, the latest CD by his own quartet. Partners in crime are trumpet player Jean-Paul Estiévenart, pianist Nicola Andrioli and faithful companion for many years Marek Patrman (drums).

In the past, I would have said the Kafka when the café was still in its initial location. It was a meeting place for musicians, artists and a vast array of night owls. Unfortunately, much has changed in Brussels, not in the least for jazz musicians. Interesting venues are closing their doors or are being thwarted, including the Chat-Pitre which I consider my favourite spot. It is a genuine Brussels local pub, home to both an international crowd and authentic Brussels locals. And what’s more, the owner organises concerts but regrettably always has to cope with the reluctance of neighbours.

It dates back to 1957, ‘Solemn Meditation’ by pianist Paul Bley with Charlie Haden, Lennie McBrowne and Dave Pike. It was the period following the recordings with Charles Mingus and he was gradually seeking to go in a different direction with an increasing focus on polytonality and polymodality. At first, you might think he wants to walk in the footsteps of the Modern Jazz Quartet until you pay closer attention to the arrangements and discover his excellence.

To be honest, I am not easily impressed by performances. An artist which I have seen on stage about three times and which always blew me away, is the Norwegian vocalist Sidsel Endresen. With just her voice, she manages to take the audience’s breath away. She does not bring many lyrics but creates an utterly peculiar atmosphere. In duo with her fellow countryman and guitarist Stian Westerhus, she has left me with an indelible impression.

When the Brazilian drummer Airto Moreira asked Miles how he could best adapt and be totally in sync with his native music, the trumpeter’s answer was: “Play like water”. It is a motto that I aim to pursue, always. I avoid unnecessary detours and try to play as relaxed as possible. That is why I have trouble with the far too overly artificial European jazz where rhythm and harmony sometimes may appear to be excessively rigid. The art of “tempo stretching” is essential.