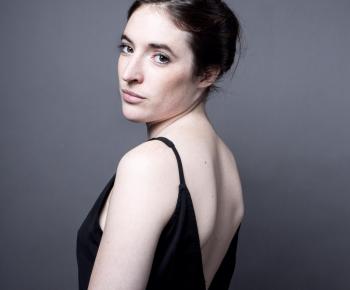 Who is… Margaux Vranken?

She studies classical piano for many years but also occasionally listens to pop and boogie-woogie. A workshop with jazz bassist Alexandre Furnelle leads her to get involved in jazz. She then follows the usual path of jazz classes at the Royal Conservatory of Brussels.
Meanwhile, Margaux sings for four years with the Choraline, La Monnaie/De Munt Brussels Youth Choir.

With the quartet Pinto (founded in 2012), she charts her own course in jazz for the very first time. Right away, she wins the audience award at the Brussels Jazz Marathon competition in 2014. The previous year, she is among the finalists at the Leffe Jazz Nights competition.
She is gaining international recognition little by little, as evidenced only recently by a series of concerts in Berlin.

All attention is currently focused on the brand-new trio with bassist Fil Caporali and drummer Pit Dahm.

In the meantime, she also composes the soundtrack for the documentary ‘Les Liberterres’ released in 2015.

It is the African Matonge district in Ixelles/Elsene with its numerous little restaurants and loads of exotic specialties. Another reason why I choose this neighbourhood is of course jazz club The Sounds where I attend concerts very often and where I had the opportunity to hit the stage already several times.

‘Covered’ by Robert Glasper: I have been listening to the CD again and again for months. On the repertoire, there are some of the great classics. I myself am a big fan of the Great American Songbook. As a composer, it is, at least in my opinion, an incredible source of inspiration.

I’d like to pick an event rather than one specific concert and that is the Brussels Jazz Marathon. This year, I did not perform on stage but it allowed me to see and hear many of my friends at work. It goes to show how vibrant the jazz scene is in Brussels.

“Only those who look far ahead, will go far”. Each and every day, you have to believe in yourself and be highly motivated.