< go back
The leading lady of Belgian jazz piano does not only lead her own (international) bands, she also plays a determining role in the male bastion of the Brussels Jazz Orchestra. 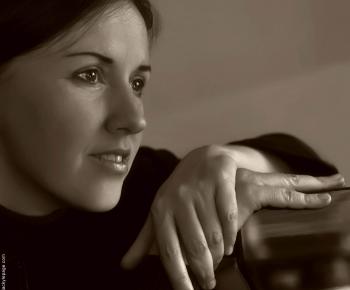 After a classical piano training, Nathalie Loriers (°1966) swiftly picks up interest in jazz. The same year she lands her first prize in jazz piano and jazz harmony at the Royal Conservatory of Music in Brussels (1999), she wins the Best Young Soloist award at the Brussels Jazz Rally. This marks only the beginning of a fabulous array of rewards.

From then on, things move pretty quickly, achieving one milestone after the other. Striking right from the start is her commitment to tradition and the respect she shows for those who have written part of the history of (Belgian) jazz.

So, she performs and makes recordings with – among many others – Sadi, Jacques Pelzer, Steve Houben, Toots Thielemans, Philip Catherine, Aldo Romano and even Lee Konitz and Al Levitt with whom she records the CD ‘Discoveries’.

She is awarded both the Belgian and the European DJANGO D’OR.

From 2002 onwards, she becomes the Brussels Jazz Orchestra’s regular pianist. A new CD will be released at the beginning of next year.

Since 2013, she performs in trio with Tineke Postma (the bassist is currently Nicolas Thys). The debut CD, ‘Le Peuple des Silencieux’ (2014), met with enthusiastic reviews everywhere. The sequel will be recorded this month.

I am actually someone who is in dire need of nature. Hence, I am currently living rather far away from the capital. However, at one time, I used to have a fixed abode in Brussels. But I was overwhelmed by the energy and the information generated by the city. On the other hand, I really do appreciate a location such as Watermael-Boitsfort, on the edge of the Sonian Forest. I like these old houses in a particular architectural style. To a certain extent, they ooze warmth and familiarity. And of course, there is the forest just next door. Unfortunately, houses in the area have become almost unaffordable for ordinary people.

I have been buying fewer albums and CDs lately and have mainly listen to music online. I am the type who consciously goes out shopping for a specific release. Unfortunately, good record shops are worryingly becoming few and far between. They disappear one after the other, such as Ut Pictura Musica at Sablon only recently. My most recent purchase is ‘The String Project Live in Brussels’ by Philip Catherine. Very beautiful compositions but above all stunning arrangements. Combining strings and jazz is no simple matter. At the time, I also made recordings with a string quartet (‘Moments d’éternité’) and I can tell you from experience which pitfalls are to be avoided. For sure, Philip knows how to get around them admirably.

That is without any doubt the solo concert by Fred Hersch last year at BOZAR. The way in which he handles everything and has everything under control, is simply masterful. It is as if he were playing four-hand pieces along with a second piano player. Brad Mehldau can do the same thing but it sounds more technical. Moreover, he had Hersch as a professor. I once attended a masterclass by Hersch and the things I heard and saw in terms of harmony and lyricism were exceptional. For me, he is of the same ilk as Keith Jarrett, except he gets much less media attention.

It is an expression I have from the one and only, Toots: ‘[I feel best in that little space] between a smile and a tear’. It is a phrase I have been using quite often lately, both in my private life and during my classes. When I lost my heart to jazz, this is precisely what attracted me: the sadness on the one hand and the joy on the other. I always try to put that discrepancy into my music. Extreme joyfulness is not exactly my cup of tea though. I have also noticed with the young generation that they often sound very tormented. It might just reflect our time and our society.