< go back
Whether it is with TaxiWars, Nathalie Loriers or in an African context, bassist Nicolas Thys always knows how to instil the right groove and the perfect rhythm. 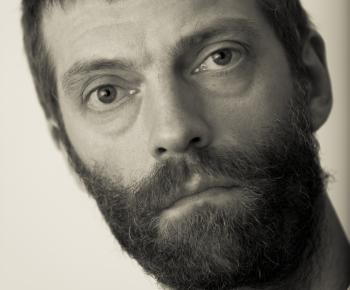 Who is… Nicolas Thys?

The list of musicians with whom he completed studio recordings or played on stage, is nothing short of impressive and reads like a “Who’s Who” of recent and less recent music history. It includes amongst many others Mike Stern, Ben Monder, Marc Ducret, Mal Waldron, Mark Turner and of course Toots Thielemans.

Given his contribution to a bevy of Belgian bands, it is safe to say that over the last twenty years, he has helped define the route taken by our national jazz.

Nicolas Thys plays both double bass and electric bass and teaches in Antwerp.

Definitely L’Archiduc. There is always a good atmosphere and the art deco interior is simply fabulous. I have known this bar since the beginning of the nineties when I started my professional career and first took the stage there with Alice’s 5 Moons. Later, I played at L’Archiduc with big names the likes of Toots Thielemans, Kenny Werner and Lee Konitz. The place is steeped in music history. The owner Jean-Louis keeps on promoting jazz by organising live concerts. I do not think he needs it financially speaking but what really drives him is his unshakable passion for jazz.

I purchased three at once. The most jazz-tinged album is ‘The Nature of Connections’ by Arve Henriksen. I accidentally heard a piece on the radio and bought the CD straightaway. I have been playing it constantly in my car for the last six months. In the meantime, my entire family has gotten hooked. My second purchase was ‘Malibu’ by Anderson .Paak. Every ten years or so, a remarkable chap bobs up on the hip-hop scene and this time around it is him. His music sounds fresh and is brimming with great ideas. The third one I have actually received from Tom Barman. He thought it was outrageous that I did not really know Captain Beefheart and so he offered me a box with his first three CDs. This free mixed form of blues and rock was an absolute eye-opener for me.

That is a tougher question. I am often on stage myself. I therefore have little opportunity to see other colleagues at work. When it happens, it is usually during a festival. So, I saw Esperanza Spalding play during North Sea Jazz. I would not say I was 100% blown away by her performance but she is one feisty lady with her own unique sound, resulting from the pollination of a sort of free jazz associated to an intricate fusion of pop, rock and jazz.

There are quotes that you read or hear but which you fully understand the meaning of only years later. I am particularly thinking of an ancient quote which recurs in many religions and philosophical schools: “We are one”. For me, making music is being part of a group. I play at the service of the collectivity. That is particularly typical of bass players. We do not need to position ourselves as soloists or leading voice. We are happy to support the band and contribute to make it sound right. To do so, I need the others and vice versa. The better bands and musicians have clearly understood it. You only have to listen to Coltrane’s or Miles’ quartets. The band members are all outstanding soloists and leaders but together they sound like one!
The idea of cohesion is also important to me on a social level. It is a pity however that today’s society increasingly encourages individualism. It is a big mistake, we should be working together. Particularly in the context of globalisation. You cannot pretend as if Africa did not exist, like we did one hundred years ago. Finally, the “We are one” rule also applies within the family circle.