< go back
An internationally renowned jazz club where young people get ample opportunities and the owners apply only one principle: hard work with a passion for jazz. 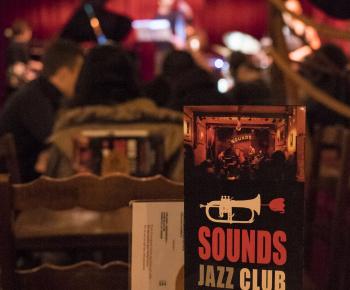 On 30 April, The Sounds jazz club celebrates its 30th anniversary. The owners and managers are none other than Sergio Duvalloni and Rosy Merlini.

In the late 1970’s, both of them – although separately – leave their homeland Italy and move to Berlin where they get to know each other. In 1985, they decide to leave Germany and move to Brussels.

On 10 April 1986, they open The Sounds. At first, the club mainly focuses on pop, rock and blues. Pol Lenders, owner of the legendary jazz club Bierodrome (just around the corner) gives Sergio and Rosy his approval to put jazz on their agenda. The rest is history.

At the time, The Sounds was one of the first clubs to feature contemporary jazz. Three decades later, its reputation extends far beyond our national borders.

The cornerstone of Sergio’s and Rosy’s success: working hard without political support or subsidies but with a true passion for jazz.

Among the many artists who performed at The Sounds, let us mention Paolo Fresu, Joe Lovano, Ravi Coltrane and of course Philip Catherine who regularly treads the boards here and each year enjoys a fixed two-day residence during the Brussels Jazz Marathon.

Sergio (spokesperson, programmer) and Rosy (catering) make it a point to give young musicians a chance. The story of the Brussels Jazz Orchestra originated in The Sounds, so did that of Octurn, two bands which since then have achieved international renown.

When I am in town, my favourite spot is undeniably Brussels’ Grand-Place. For me, it is our capital’s most beautiful architectural gem. And each year, jazz concerts take place on Grand-Place during the Brussels Jazz Marathon. And when I am in need of some greenery and peace and quiet without cars around me, I go to Ossegem park at the foot of the Atomium. There is also plenty of jazz each year with the Brosella Jazz and Folk Festival. Hence, two tourist attractions where there is some awesome jazz going on.

As club owner, I receive piles of musical work sent by artists who by doing so submit their application. It would be absurd for me to purchase CDs and albums while I simply do not have enough time today to listen to everything. However, if I had to buy a recent release, I would choose the solo album by Aka Moon’s bassist Michel Hatzigeorgiou. His ‘La basse d’Orphée’ is a genuine masterpiece. On this album, he covers the full range of jazz, from groove and swing to a more modern approach and even rebetiko. In addition, next to bass, he plays a whole series of instruments such as banjo, mandolin, bouzouki, baglama and guitar!

In my club, I attend six concerts every week, most of which are very good and only now and then, there is a letdown. Yet, there are only a handful of musicians who are head and shoulders above the rest, such as only recently, Philip Catherine. Because of the unexpected unavailability of drummer Hans van Oosterhout, the initially scheduled quartet was reduced to a trio with bassist Bart Denolf and pianist Nicola Andrioli. But what a performance! I immediately asked Philip to perform here with this line-up during the upcoming Brussels Jazz Marathon.
Two other musicians I also would like to mention are trumpeter Jean-Paul Estiévenart and violinist Tcha Lindenberger who with their respective bands never fail to impress me and deliver outstanding performances time and again.

On the Sounds’ twenty-fifth anniversary, a journalist asked me what our secret was. Running a jazz club is hard work but alike musicians who want to stand out from the crowd, there is only one principle: you should do whatever you do with passion. If I was in it for the money, The Sounds would be long gone, believe me. The same applies to musicians. For them, it is also a true vocation because the government invest hardly at all in the jazz sector. You have to make it all happen yourself.