< go back
As a musician, Vincent Ghilbert likes to indulge into more modern jazz but as the organiser of the Blue Flamingo Festival, he also opens the door to other alternatives. 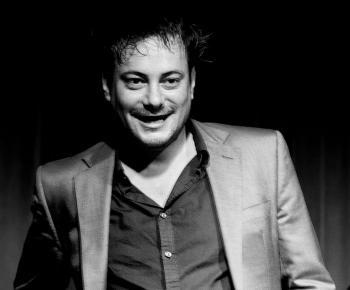 Musician Vincent Ghilbert (°1978) emerges on the Brussels jazz scene around 2004. He soon wants more and three years later co-founds MuseBoosting with the intention of assuring bookings and defending the interests of (own) groups. This gives rise to the idea for the Blue Flamingo Festival, a two-day event in the enchanting setting of the Karreveld castle which besides music also proposes culinary specialties (including Brussels craft beers).

As a clarinet player, he is endorsed by Henri Selmer, the international instrument manufacturer with headquarters in Paris.

A first CD of his group Flying Fish Jump is released in 2012 under the title ‘Road Trip’ which gets him nominated to the Octaves de la Musique in 2013.

He has currently put his musical activities on the back burner although he is working hard on a second CD. For the time being, all of his attention goes to the Blue Flamingo Festival and to the work behind the scenes for “MuseBoosting’s Web Audio Future”.

The entire Flagey neighbourhood with the charm of its ponds and abbey on the one hand but also the more popular side of it with its chip shop and cafés on the other. The open square offers a lot of opportunities for fun activities such as the market and various open air performances of all kinds.
I remember a recent electro concert in L'Amère à Boire, a café just around the corner: a fabulous atmosphere which is so typical of the area. And obviously, there is the Flagey building itself where both lesser-known groups and artists and big international names hit the stage. Another big plus is that I have a lot of musician friends living nearby and I always bump into one of them who is all too willing to go and have a drink with me (laughs).

Nowadays, I am again more and more listening to records from my own vinyl collection. Also, my radio is often on. Since my youth, it is one of my main sources of information. For instance, I miss almost none of Philippe Baron’s “Jazz” broadcasts on rtbf. Radio Campus is also a must.
When I want to listen to something specific, I generally look for it on one of the music streaming services on internet, in which case I choose the paid service. Personally, I think it is great you can pay on a rate per song nowadays. And sure, there is still a lot of confusion and problems putting music online but I fear that this is the future, so why not make the most out of it right away? What I would find both interesting and useful is that radio and internet would converge even more with buttons such as “like” and “share”, and a similar offer to Deezer, Spotify and YouTube, all of which of course taking into account copyright.
But to finally answer your question, my last purchases were rather nostalgic in nature: ‘Unfinished Sympathy’ by Massive Attack as well as ‘Eden’ and ‘Mad About You’ by Hooverphonic. Hence, pop music, but I also quite often listen to Trilok Gurtu, John Carter, Nina Simone and even Prokofiev.

I have been a huge fan of Aka Moon for years but the group that impressed me most lately is Mâäk. The interplay, the compositions, the whole vibe, it all comes together.

It is a quote by Francis Bacon: “We are born and we die, and in between we try to give meaning to this meaningless existence”.