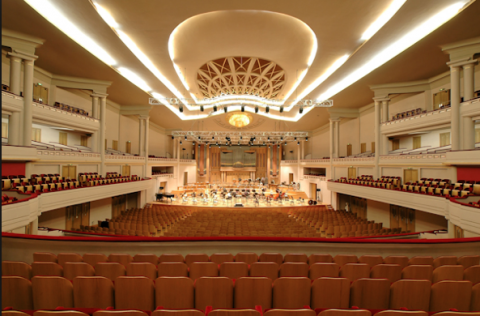 The imposing Art Deco building by architect Victor Horta has been the setting for a host of musical styles, where jazz claimed a prominent position from the very outset. Every style that marked the historical development of the genre came and went here, from Louis Armstrong and the Big Bands via bebop and the free jazz of the turbulent 1960s to the latest developments in the area of electro jazz. By way of a series of eclectic programmes set to get under way with the 2014-2015 season, the programmers are keen to show that BOZAR, now more than ever before, links the past and present of jazz, thereby giving a glimpse into what the future holds.

The official inauguration of the building took place in 1928, just when the first jazz explosion was breaking through on a large scale. Brussels audiences had already become acquainted with the new American craze in a number of concerts at various locations across the capital (including those at the Alhambra building). At the time, Bozar still used a venue rentals system. Somebody who was quick to pick up on the jazz potential of this house of arts was Felix Faecq. The man already owned his own music publishing company and a magazine. In 1932 he founded the Jazz Club de Belgique, whilst organising concerts and competitions for jazz bands at the Centre for Fine Arts. From the 1932-1933 season onwards, jazz was richly represented, with gigs by Jack Hylton et ses Boys, Ray Ventura et ses collégiens, Jack Payne & His Band and The Mills Brothers to name but a few. The biggest names on the bill were Cab Calloway (“Le plus Célèbre Orchestre Nègre de New-York”, 18 April 1934) and Louis Armstrong (“et son fameux jazz nègre”) who was invited to perform no less than three times in November of that year.

From big bands to bebop

Even during the Second World War, jazz remained alive and kicking, with artists including the likes of Django Reinhardt and Stan Brenders. It was typical for this period of paper scarcity that no programme booklets were printed, so the archives for this period have a few gaps. Also much took place in semi-secrecy but important big bands including that of Robert de Kers and his Cabaret Kings did continue to play official concerts at the Centre for Fine Arts.

In the two decades after the war (1945-1965), past, present and future of jazz alternated on the bills. The Ramblers, Louis Armstrong, Sidney Bechet and Benny Goodman were still much admired guests but with Dizzy Gillespie (19 February 1948) a new era was ushered in. Bebop was under way and visitors to the Centre for Fine Arts already got a taster of things to come. They were able to hear artists such as Kenny Clark, Roy Eldridge, Gerry Mulligan as well as Art Blakey (who became a regular). The popularity of the big bands continued to linger with performances by Stan Kenton, Lionel Hampton, Count Basie and Duke Ellington.

In the meantime, Norman Granz was causing quite a stir in America by organising his ‘Jazz at the Philharmonic’. The whole revue also came to Europe, with stops at the Centre for Fine Arts. A great opportunity to see live performances by big stars such as Oscar Peterson and Ella Fitzgerald. George Wein’s ‘Jazz From Newport’ caravan also made the crossing, with artists including Jimmy Rushing and Buck Clayton on board. The spotlight was also trained on West Coast jazz with people such as Chet Baker, June Christy and the Bud Shank Quartet. Among them you also had Kid Ory & His Creole Jazz Band.

Others who immortalised the stage of the Henry Le Boeuf auditorium in the annals of jazz included Sarah Vaughan, Ray Charles, Erroll Garner, Jimmy Smith, Max Roach and Abbey Lincoln. One particular dream bill was that of 4 November 1956: Morris Levy’s Birdland ‘56 with The Modern Jazz Quartet, Miles Davis, Bud Powell and Lester Young.

From free to electro

The late 1960s - early 70s saw a major cultural revolution. Concerts became performances. Particularly memorable was the notorious performance of Alterations (the group including David Toop and Steve Beresford), where ropes had been put up to deliberately impede the visitors to the exhibition. One of the musicians even dived into a rubbish bin. The Belgians also played an important role, with pioneers such as Fred van Hove and Paul Van Gijsegem leading the way. The Willy Roggeman Jazz Lab, founded in 1967 and one of the trail-blazers in the genre, was even invited by what was then still the BRT (Belgian radio and television broadcasting corporation) to perform at the Centre for Fine Arts in 1972.

In the meantime, the major American stars continued to remain frequent visitors while a new generation followed. The bills featured the likes of Dave Brubeck and Count Basie, Ornette Coleman and Buddy Rich.

Thanks to ‘Jazz From Newport’, the Centre for Fine Arts audiences became acquainted with the cream of the crop of American jazz. Among them were the already legendary names of Charles Mingus, Earl Hines, Thelonious Monk, Sonny Stitt, Kay Winding, Cannonball Adderley and many more.

Throughout, Belgian artists always got their fair share of attention .Toots Thielemans and Philip Catherine gave birthday concerts here; Kris Defoort was ‘artist in residence’ (2006-2007) and the Brussels Jazz Orchestra put on one of the great unforgettable moments.

All the while, jazz is continuing to evolve. The latest trends also find a place in the programme. Jozef Dumoulin, Joachim Badenhorst and Gregory Porter, for instance are proof positive that the people at BOZAR have their finger firmly on the pulse of the latest developments. Using two "smaller" auditoriums (450 and 220 seats respectively), in addition sees them creating a platform to reach a niche audience that is not only interested in the established names. “We have a reasonable wealth as far as talent is concerned, certainly in Belgium. So it is almost a matter of course for us to make room for this,” says jazz advisor Rob Leurentop. “It is a deliberate choice” explains programmer Tony Van der Ecken. “Jazz used to be something that took second place a little, now we are building our own character. Which is why we work closely with schools and organise master classes for instance.”

Anyone who attends jazz concerts at the Centre for Fine Arts with some frequency can rightfully say he has seen the past, present and future of jazz at BOZAR.

If you would like to find out more about jazz at BOZAR, please contact PSK nv (plc) which is responsible for the archives, which are available to be consulted by appointment. The collection consists of administrative and artistic records, photos, catalogues, announcements, programme booklets, bills etc.

We asked Rob Leurentop to compile a top three of jazz records every righteous jazz lover should hear.
He picked the three songs listed below, each of which has a special meaning to the city of Brussels and Belgian jazz in general.

* ‘Ne Me Quitte Pas’ by Toots Thielemans (Milan Records): a live recording from 1987 at BOZAR with a young Fred Hersch in the band. Hirsch has since become established as one of the great pianists and is set to appear with Dave Holland in a double bill this upcoming season at BOZAR.

* 'Bennink & Co' * Han Bennink Trio (ILK Records, 2012): this legendary Dutch drummer heads up a provocative trio and is inviting Belgian clarinettist Joachim Badenhorst to join him as a guest with the Ho Bynum-Fujiwara duo during the 2014-15 season at BOZAR.