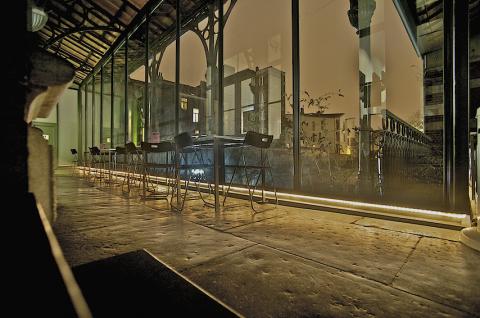 In the Jazz Station in Brussels, you experience jazz to the tones of passing trains. The club is located in an old train station, built over tracks of the Brussels-Namen-Luxembourg network. You can watch the trains from the terrace against the sounds of blue notes. An occasional unique experience, one on which musicians regularly improvise.

The original building was designed by engineers H. Joniaux and V. Maillet in a style that is midway between neo Baroque and neo Flemish renaissance. The building was officially opened in 1885. The station, however, lapsed into disuse before World War 1. Fortunately, the building was listed in 1996 and in 2003 a lease agreement was signed between the NMBS and the municipality of Sint-Joost-ten-Node so that a cultural centre could be created there under the name of Jazz Station. This is not really as strange as it may appear, for trains have always played an important role in the history of jazz. Duke Ellington’s ‘Take The A Train’ (composed by Billy Strayhorn) or his own ‘Daybreak Express’ are among the most celebrated references. And we shouldn’t forget Django Reinhardt’s ‘Mystery Pacific’ or the Glenn Miller hit ‘Chattanooga Choo Choo’.

The driving force behind the whole idea of a Jazz Station was the former mayor of Sint-Joost-ten-Node, Jean Demannez. He encouraged the European Commission, the municipality of Sint-Joost-ten-Node and the Brussels-Capital Region to provide the necessary financial resources. It is hardly surprising that Demannez was so motivated because he is himself an extremely enthusiastic jazz drummer. The official opening took place in September 2005. Since then, this place has grown into a multifunctional space where jazz sets the tone.

Jazz in all forms: from concerts and lectures to sneak previews and big bands.

From the very start, those responsible for the Jazz Station aimed to reach as wide a public as possible without entering into direct competition with the existing jazz clubs. To achieve this, they developed a wide range of activities.
The best-known initiative is the weekly cocktail concerts at 6 pm on Saturday. In addition, courses were given (in French) on the history of jazz by Jean-Pol Schroeder, author of various books about Belgian jazz and delegated director of La Maison du Jazz in Liege. Since 2013, a series of lectures in Dutch have been held in collaboration with JazzLab Series, the association that promotes jazz in Flanders through tours and many associated activities.

Something that is particularly popular with musicians is the possibility of using Jazz Station for rehearsals or even residences so that they can try out a project under the most professional circumstances. Many of these rehearsals, by the way, can be attended free-of-charge by the audience. In this way, Jazz Station fulfils the role of a true jazz laboratory. The highlight until now was the residence of Aka Moon for five weeks at the end of 2012, on the occasion of the twentieth anniversary of the group’s existence.

In addition there are also the sneak previews. Under the theme “carte blanche”, musicians are given complete freedom to develop a totally new programme which they then present at a special concert evening. Such performances often act as the première for a subsequent tour.

Since 2006, Jazz Station has been the home of the Jazz Station Big Band, conducted by Michel Paré. Initially, the idea was that they would perform every month, like the Village Vanguard in New York. But since the members all belong to the top of the Belgian jazz scene, it proved impossible to maintain this rhythm and these concerts now take place once every two months, on the first Thursday of the month. In 2011, this big band released their first CD, which was enthusiastically received by both press and public. The next release is planned for some time in 2014.

There is more big band in the Jazz Station, thanks to the Brussels Youth Jazz Orchestra, founded by Youth and Music Brussels, in collaboration with the Brussels Jazz Orchestra. As the name suggests, this orchestra consists of young musicians under the age of 25. The ensemble organises a residence here twice a year.

Belgian musicians are central to the Jazz Station, but international jazz musicians are also welcome. This is particularly true during the Jazz Nights. These are three-day mini-festivals with an international allure, which are held several times per year, each time focussing on a country or region. Recently Spain, the Czech Republic, Germany, France and even Canada have been in the spotlight. These evenings are frequently organised in collaboration with international partners located in Brussels, such as the Goethe Institute. In this way, the Belgian jazz lovers are kept up to date with the jazz scene in neighbouring European countries.

The Jazz Station is also partner in major jazz events in our capital, such as Brussels Jazz Marathon and the Saint-Jazz-ten-Noode Festival. In June, the finals for a number of music academies are held here. Since 2013, Jazz Station has been the place where the international day of Jazz (30 April) is brought to a close with a concert by a renowned Belgian celebrity. It is organised in collaboration with Les Lundis D’Hortense and Musiq3.

Concerts are held regularly on Sunday afternoon under the motto “learn young and get enjoyment from a young age” and the whole family is invited to attend.A valuable partner in this is Les Jeunesses Musicales de Bruxelles. Musicians from various jazz streams explain what is happening on the stage, using their own live music as illustration. Here proof is given time and again that jazz is also accessible to children from the age of 5.

Jazz Station also fulfils the role of archive. Its own collection of books, records and magazines is growing and gradually achieving shape. All documents can be consulted on site on request. No archive would be complete without exhibitions. Jazz Station regularly organises exhibitions which relate directly to jazz.

The building also houses the offices of the jazz organisation Les Lundis D’Hortense. They organise a concert ever Wednesday from October to May.

In short, Jazz Station is a place where jazz lives in a highly unusual setting. The ambiance is determined by an international audience that comes here to enjoy, in perfect acoustic conditions, jazz of the highest quality. A by no means insignificant aspect of all this is that the bar offers a fine choice of traditionally brewed Belgian beers. Another original feature is the lounge room just behind the bar, where you can enjoy the concerts on a large TV screen from the comfort of an armchair. After their performances, the artists regularly chill in the bar, so that animated conversations frequently take place. Après-jazz as you can only find in the Jazz Station. The exceptionally democratic admission price is an additional trump card.